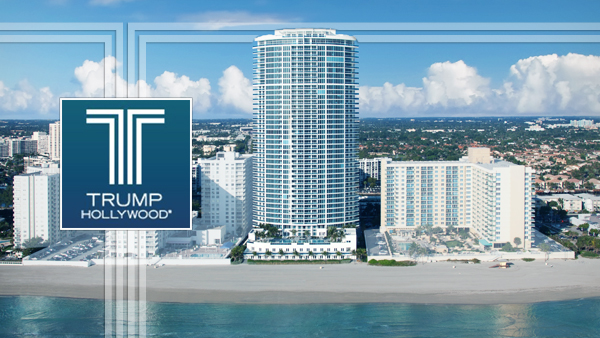 Throughout much of the world, the Trump name is synonymous with conspicuous wealth. Here in the US, the high profile of the man behind the name can work against the sales of condominiums to those who place a high value on privacy and discretion. Some of the real estate projects bearing the Trump name have diminished the value of the brand in certain markets. In South Florida, a phalanx of Trump-branded towers rose on Sunny Isles Beach in the early 2000s, but performed badly in sales.

When it debuted just a few miles to the north, Trump Hollywood was frequently assumed to be another of the maligned Sunny Isles properties, despite having no association with them. There also existed a discernible prejudice amongst area brokers against Hollywood Beach. The 20-year boom that had transformed the coastal communities north of Miami into a contiguous high-rise canyon, had spared the town, which rests on the same stretch of sugar-white sand, just over the Broward County line. As a result, the town retains a village feel for which it is locally revered.

Both of these misconceptions further complicated the daunting challenge of launching the super-luxurious Trump Hollywood into an economy that had suddenly run out of steam. Planned and designed at the peak of the bubble, Trump Hollywood is perhaps the last and most opulent condominium tower of its era.

Brought in by the Cervera Real Estate sales team to help bring the building to market, as the branding agency LGD took the position that trying to address local prejudices in a market with no buyers was a waste of resources. Sitting and waiting for buyers to find their way to Trump Hollywood was not a viable strategy in the new, post-bubble South Florida. Trump Hollywood would need to mount a global campaign to find its 300 or so buyers.

The worldwide initiative devised by LGD as the branding agency utilized social media and e-marketing to reach an affluent, global audience. The Trump Hollywood branding made calculated use of the Trump identity, voiced with more subtlety than is typical for the brand, in support of the South Florida oceanfront lifestyle. The creative is suffused with a hushed sophistication that takes its cue from the sumptuous interiors designed by the acclaimed firm, Yabu Pushelberg.

By recognizing Trump Hollywood’s distinctive appeal, LGD was able to accurately profile the buyer, isolate universal qualities that translated to online behaviors. On-target messaging opened conversations that led to a remarkable conversion rate. Within one year, Trump Hollywood had reached over $150 million in sales to buyers from 15 countries.